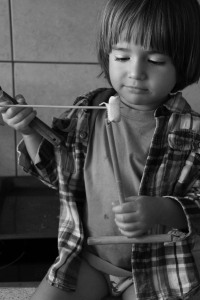 My first advice after seeing my pictures is to be careful not to allow your son to sit on the edge of a stove stop. I was well aware that the stove was off but one it could create some confusion as to what a stove is used for  and two perhaps the uneven distributed weight of a child can break the glass. Avoid the end result of a big screaming ouch!

The story of the pictures is kitchen utensils and marshmallows make for some interesting robots. However my son was not so fascinated with his robot because he could not build it the way he wanted to. It was until he realized he could devour the marshmallow and destroy the robot that he had fun.

Technically they were traditional Guimauve made in Montpellier, France since 1890 and ooh darn I just read the ingredients and found out I ate pork!  Jeremy’s mother told me they were all natural, I did not know that meant natural flavors and pork gelatin. I imagined arrowroot powder. Silly old vegetarian roots living inside my brain, pork is natural too. Its just an animal I prefer not to eat.

One thought on “marshmallow robot”